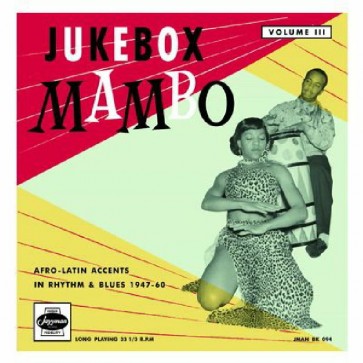 Over 3 years in the making, this is another journey into the world of Jukebox Mambo - another set of sweltering rumba accented Rhythm & Blues! This 10" book set has 4 EXTRA TRACKS not included on the 2LP.

• A journey through the popular American music of the 1950s influenced by exotic rumba and Afro-Latin seasoned rhythm and blues.

Since the release of our first Jukebox Mambo compilation album in 2012, we have, with the curatorial expertise of DJ Liam Large, been opening ears and minds to the delights of Latin-tinged Rhythm & Blues. This, the third release in the series, sticks squarely to the tried and tested formula of its predecessors; combining a crate-digger's passion for the obscure with an ear for instant dancefloor crowd pleasers.

In a congested field of R&B comps, Jukebox Mambo stands out uniquely in shedding light on the era of Latin American and Caribbean influence, a sensual rhythmic shift which continues to be felt in modern music today.

Opener, The Emperor's 'Tough De Times (Things Getting Tough)' is a classic example of our capacity to bring striking singularities to light, a beguiling and seductive blend of jazz, blues and Trinidadian calypso. Other highlights include the slinky rumba-blues of Percy Mayfield's lustful 'Loose Lips', the only known recording by female blues shouter Ethel Boswell on the track 'No More For You', and Chuz Alfred's powerful rendition of the Duke Ellington standard 'Caravan'. Elsewhere, Jukebox Mambo 3 is dominated by virtuosic performances, from the smooth tenor vocals of Roy Gaines to the polyrhythmic swing of the Monogram Caribbean Orchestra, and the Syrian-American jazz stylings of Eddie Kochak.

Lovingly compiled, artfully arranged and expertly annotated, Jukebox Mambo Volume 3 is another immersive gaze into an era of musical history that still carries a unique influence today. This one is for the crate diggers and music lovers alike!