One of These Days

Almost 20 years since they formed The Haggis Horns maintain their premier position at the top table of UK funk/soul bands. Their ever growing fan base, their ability to attract a new younger crowd while maintaining their original following, their release of quailty music on a regular basis and a busy diary of gigs both at home and abroad ensures they're as popular as anytime in their long life.

Their storty is well documented elsewhere so no need to dwell on it too much here. Just look at the artists they've worked with and you can see the calibre of the band. These include Mark Ronson, Amy Winehouse, Corinne Bailey Rae, Jamiroquai, Lily Allen, Lou Donaldson, John Legend, The Roots, Martha Reeves and Roots Manuva to name a few.

In November 2017 The Haggis Horns Release their fourth studio album since their debut in 2007 and once again it's on their own Haggis Records. It's called "One Of These Days" and as expected, it features the usual heavy funk/jazz-funk dance floor bangers but also a nice mix of other genres, including their first recordings with a rapper, a proper disco/boogie gem and some sweet laid back 70's style soul. The usual Haggis Horns musical stew that showcases all their favourite influences from the soul, funk, hip hop and jazz traditions.

There's a new rockier guitar sound on this LP reminiscent of Dennis Coffey's mid 70's b-boy funk instrumentals, especially on "Gonna Be Alright". Talking of b-boys, the band have collaborated with rapper/MC Doc Brown on the first single from the LP, released in summer 2017, the old skool funk/rap/hip-hop block party anthem "Take It Back". He also features on the other hip-hop/funk track "What's It All About". Shades of early Hip-Hop here from 1979/80 back when the first MC's rhymed over music played by live bands, like the Sugarhill Records house band on that label.

"One Of These Days" proves once again why The Haggis Horns are still top after two decades...they write their own songs, they don't follow the crowd, they stay ahead of the curve and they're always willing to take musical risks. And long may it continue! 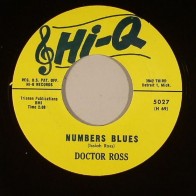