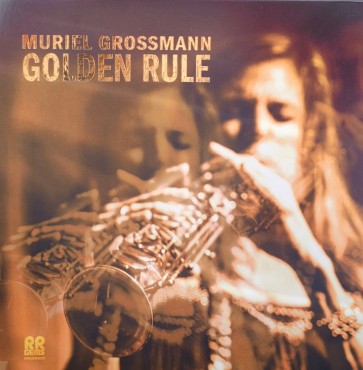 A1 Golden Rule
A2 Core

B1 Promise
B2 Direction

The music of Austrian saxophonist and composer Muriel Grossmann, who is living in Spain. Without detracting from the merits of Muriel’s earlier works, I consider her new project Golden Rule to be the creative pinnacle of this talented jazz lady and her strongest work up to this date.

Also Golden Rule was recorded like the last three albums by Muriel’s Austro-Serbian quartet with guitarist Radomir Milojkovic, bassist Gina Schwarz and drummer Uros Stamenkovic. The album is very solid in terms of duration: more than eighty minutes of sound, only seven tracks all together. The longest, Traneing In (almost nineteen minutes of sound), took the whole side of one of the vinyl records. But the point, of course, is not the length, but the quality of the music.

I have never heard Muriel Grossmann have so much expression and inspiration in her playing on both her instruments, on the soprano saxophone (as in the starting piece of Golden Rule), and on the tenor saxophone (as in the next Core). Muriel’s long, unusually emotional improvisations are followed by Milojkovic’s answering and elaborating guitar solo, then to give way to a new, equally expressive and technically diverse saxophone solo. Muriel plays in this album as if it is the last time in her life! All this action takes place against the background of flexible polyrhythmic constructions created by the rhythm group (in my opinion, this album became the most striking performance for Stamenkovic). When in the piece Promise or in the final, meditative composition Light, the tempo becomes somewhat more moderate, this does not affect the quality of the performance. In Direction, Grossmann’s saxophone improvisations are well received in an excellent double bass solo by Gina Schwarz. And from the point of view of guitar work, the top of Milojkovic, for my taste, is in the composition Trane.

It is worth remembering, that Muriel considers as one of her main teachers, the famous German free jazz pianist Joachim Kühn. Perhaps the extraordinary freedom of expression reigning in GOLDEN RULE is, to a certain extent, due to its influence. Well, and, finally, the main source of inspiration, the eternal light of many Jazz generations already — John Coltrane. It is not by chance that one of the pieces of Grossmann in this album is named after him, and the name of the other is the neologism of Traneing In (literally: “Inhaling”). Trane, especially the late Trane, regarded music as a kind of sacred, spiritual act. Following him, Muriel Grossman aspires to the same spirituality in her music, and — damn it! — She’s great at it!

The liner notes author Michael Jacklin explains the title of the “Golden Rule” album by the famous biblical (and worldly) maxim: “Treat others as you would like them to treat you”. It’s hard to argue with that. But with reference to the work of Muriel Grossmann, a different interpretation can be made here: “Go your own way. perfect yourself, set yourself more and more higher tasks.” The new album of Grossmann, in my opinion, is a masterpiece reflecting exactly such an approach. Leonid Auskern